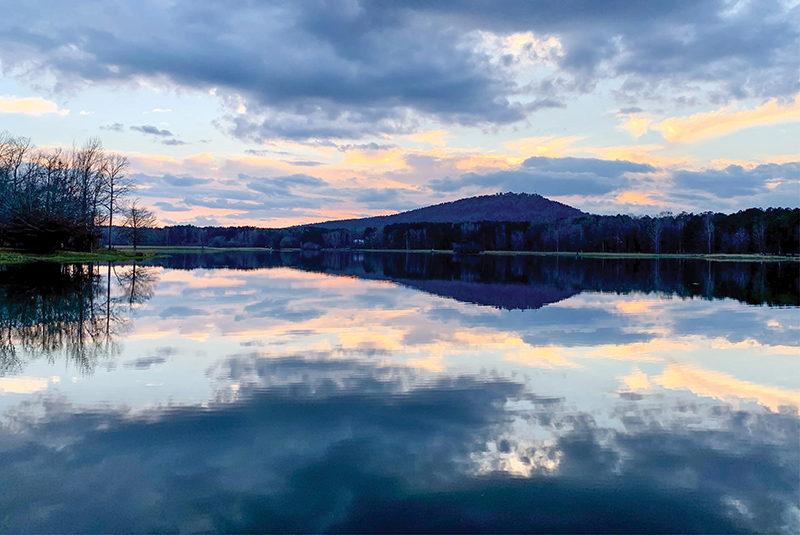 If you missed it, read Part 1 here.

Winston Churchill once said that “continuous effort, not strength or intelligence, is the key to unlocking potential.” Safe money would bet that he wasn’t discussing the mindset required to build a killer bass lake, but the sentiment rings true as we look at turning an average pond into a dream fishery. This is our second installment of the Lake Y Project. With the help of Lochow Ranch Pond and Lake Management, the nation’s premier lake management company, we are going to share with you the tips and techniques that will help you better your favorite fishing hole.

Lake Y is a 60-acre, creek-fed body of water located somewhere in Alabama. It has bass in it, but as we mentioned in the first installment, there are more gar, carp, catfish and crappie. Our goal with this project is to employ the real-world practices of fishery biologists and lake managers to not just make Lake Y a fishing Mecca, but to lead you on a path of discovery and inspiration to unlocking the potential that exists underneath the water’s surface. And as Nick Saban, head football coach of the Alabama Crimson Tide, so often says, it’s all about the process. 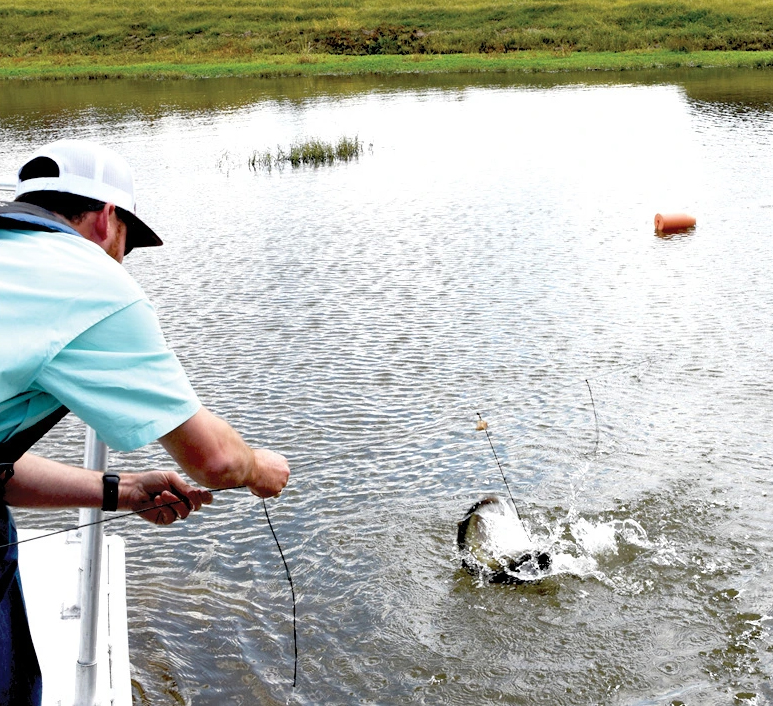 One of the first steps to improving Lake Y was to reduce the number of undesirable fish that compete with bass.
Trotlines were set, and catfish were removed.

In case you missed the inaugural Lake Y feature (July/August 2021 issue), let’s do a quick rundown of what we learned. “Lake Y is a very shallow body of water,” said John Jones, owner of Lochow. “It averages just 5 feet of depth. This would probably disappoint some anglers. But, remember, the most productive bodies of water in the nation are the ponds on fish farms, which are shallow and featureless. We will certainly manage it differently than a deep lake. But it can still be awesome.”

The lake has an active creek running through it, with water being managed by a spillway. “Because there is a consistent flow of water going through the lake, it really reduces the number of inputs we can consider to improve the fishery,” Jones said. Normally, Jones would look at adding fertilizer and/or lime to maximize the fertility of the water. Fertile water allows for faster growth of all the fish life within the lake. But, with Lake Y, these additives would be flushed over the spillway. “We’d basically be setting cash on fire if we tried to fertilize this lake. And a lot of lakes across the country are like this. So, we will have to focus on the inputs that will make a difference.”

Lochow shocked Lake Y in early 2021. On the forage side, threadfin shad, gizzard shad and a variety of bluegill were collected. Unfortunately, there were not many bluegill, and all were small. Nondesirable species collected included gar, channel catfish, common carp, white crappie and freshwater drum. “It’s not a terrible thing to have catfish and gar in your bass lake,” said Jones, “but if you have too many of them they will outcompete bass for food. Plus, catfish, carp and drum can wreak havoc on bass spawning beds and negatively affect your water quality.”

As for the bass, the initial shocking survey certainly could have been worse. The majority of bass collected fell in the 13- to 16-inch range. The largemouth fell either on the line of standard bass weight or below it. The biggest fish collected was a 21 1/2-inch bass that weighed in at just under 6 pounds, well below the standard weight of a fish that length. “Lake Y fish are hungry!” Jones said.

After the initial visit to Lake Y, Jones identified the top three priorities for moving forward. The first one, he says, is both boring and the most important. “We need to add feeders and quality fish food.”

“Look, we have three things we can control on this lake. Food for both bass and the things bass eat, control of nondesirable fish and bass genetics. The fastest way to get where we want to get is to feed the snot out of the fish the bass eat so the forage population thrives.”

OK, point taken. Although Jones recommended adding a dozen or more feeders to Lake Y, that was cost prohibitive. So, we added four really good feeders and filled them with a high-protein pellet. “Not all fish food is made well. Actually, most fish food is garbage as it relates to actually growing fish. You want to feed bluegill a pellet that has at least 50% protein. We actually developed our own food [56% protein] because there was nothing on the market that really met our expectations,” Jones said. As an example, you can feed bluegill the standard stuff you get at Tractor Supply, which has only 36% protein, and you will see maybe a 1/4-pound growth over an 18-month period. With the Lochow pellet, Jones regularly sees a 1-pound increase in weight over the same time period. 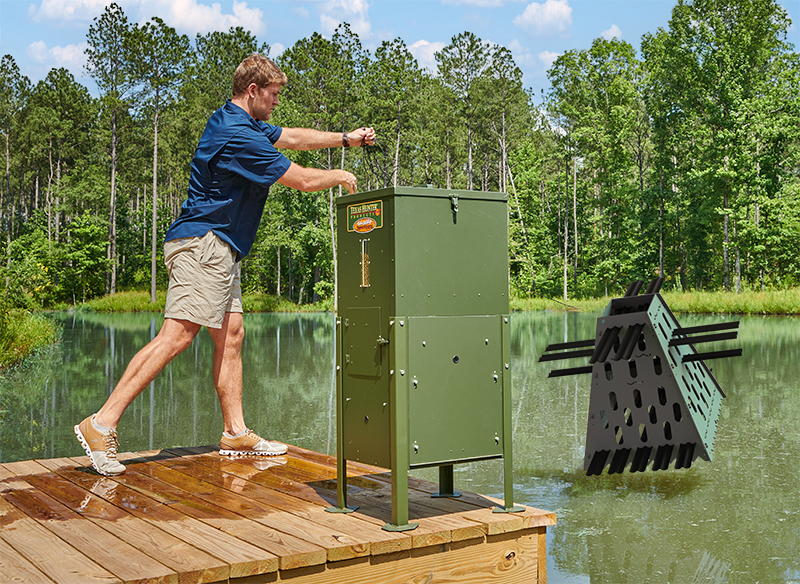 Of course, you want to use a good feeder, as well. The cheap versions will drive you crazy. Water will get to the food, ruining the pellets. The spinner will malfunction, break or clog. And the electronics/wiring will simply not hold up to the elements. “We have hundreds of thousands of man-hours working on and installing feeders. Finally, we teamed up with the folks at Texas Hunter to custom design the most dependable fish feeder on the market.” The Lochow feeder includes a solar panel, which recharges batteries. It holds 425 pounds of food, so you don’t have to refill frequently. It covers about 2,000 square feet of surface area when shooting out feed. Plus, it’s built like a waterproof tank.

Also, choose your feeder locations wisely. Determine the prevailing wind, and place the feeders in different areas of the lake where the food will be pushed into the lake, not up against the bank.

Now that the food for the forage box has been checked, Jones decided to add some food for the bass. “Again, we have limited inputs. Based on the initial shock survey, Lake Y is mostly devoid of bluegill. For the bass to grow, they need groceries. Bluegill is a foundational forage base for a healthy bass fishery. So, we are going to build the Lake Y buffet.” And build it he did. A giant Lochow truck rolled in with three mega-loads of bluegill. “We are going to dump about 30,000 coppernose bluegill in Lake Y in three different size ranges. About a third will be juvenile, a third will be in the 3-inch range and a third will be mature, ready to spawn this year.” Adding some mature bluegill will ensure that come spawn time, their 15,000 to 60,000 eggs per fish will supercharge the food chain. Plus, these fish will spawn throughout the summer until the water drops below 60 degrees. As a bonus, they can reach 2.5 pounds if fed properly, which makes them an angling treat.

The next priority for Lake Y is to eliminate nondesirable species. The easiest and debatably most destructive fish as it relates to bass populations are catfish. “You can make an argument that carp are really bad because they vacuum eggs off bass beds. You can argue that crappie can outcompete bass for forage. But, catfish do both. And on top of that, they also stir up the bottom and degrade water quality. I’ve seen overpopulations of catfish turn a lake into a mudhole because they stir up the bottom and all that sediment suspends,” Jones said.

So, we set out some trotlines. Three of them, to be exact, with 100 hooks apiece. We baited the lines with a man-made bait and with cut gizzard shad. We let the lines soak overnight and checked them the next morning. To our surprise, we only caught four. “Either we don’t really have a catfish problem here or the timing was just bad. I can’t make that determination based on one night of trotlining. We need to do it again in the spring or summer to verify there is not an overpopulation.” Jones was glad to see that the catfish we did catch were all big, mature channel cats. If they are spawning, something seems to be eating the babies. 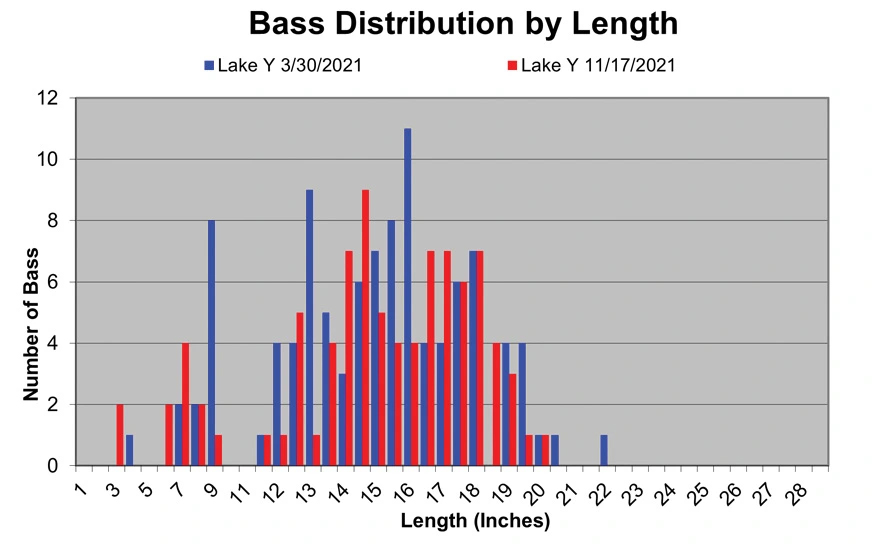 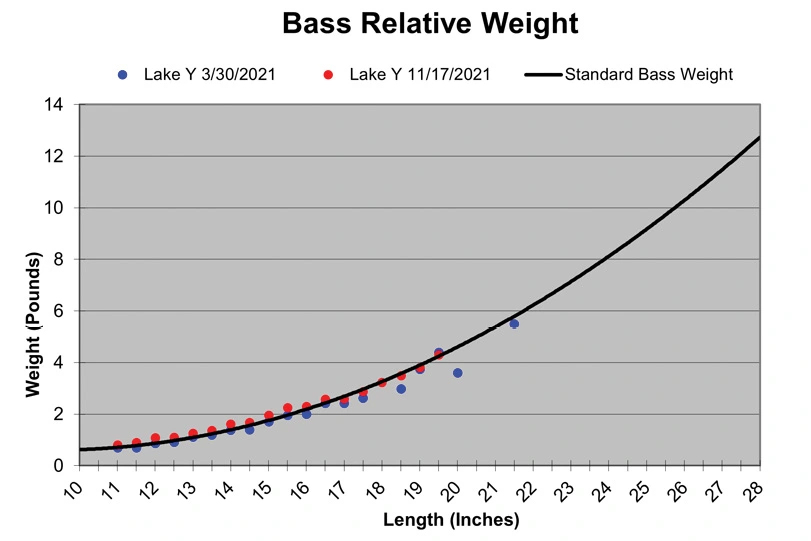 Here are the results of the two electrofishing surveys performed on Lake Y. Each is just a snapshot of the day, but gives us a baseline of what the population looks like. As you can see, we have some work to do.

Before heading back to the home offices of Lochow, Jones and his biologists performed another electrofishing survey of Lake Y. Jones recommends at least two per year to keep tabs on what’s happening underwater. After the data from the second survey was compiled, I asked Lochow biologist Lee Schoech to describe the findings. Here is what he said.

“Overall largemouth population structure was similar spring to fall 2021, which was expected. However, relative weights were up from spring [prespawn] to fall, which is somewhat unexpected. Based on the data available, higher fall relative weights could be explained by temporal submerged aquatic vegetation variation. This past summer, submerged aquatic vegetation coverage was very high, approximate 75% coverage total. When vegetation communities are so abundant, predator/prey interaction can shift in favor of the forage population due to increases in decapod crustaceans/other invertebrate prey items, available refuge and recruitment. As the lake transitioned from summer to fall conditions, vegetation became less prevalent, shifting the advantage back to largemouth. This would explain the weight increases observed.”

I love listening to scientists, although I don’t always understand them. I think he’s saying all the grass in Lake Y gave the stuff bass eat places to hide. When the grass died, the bass went to work on these critters and got fat. As for the DNA results, Schoech said the results were what he expected.

Lastly, Schoech commented on the near-future expectations after adding both bluegill and a feeding regimen for these forage fish. “Now that the feeding program has been established, and with the catalyst of the supplemental bluegill stocking, the bass population is poised for good growth in 2022.”

So, we wait and believe in the process. You’re welcome, Coach Saban. Improving a bass lake is not an overnight accomplishment. But, as Churchill wisely stated, potential is unlocked through continuous effort. We will remain steadfast and sit with excited anticipation of what the future holds for Lake Y.

For detailed video content of the Lake Y project with Jones and the Lochow team, visit Bassmaster.com.

If you missed it, read Part 1 here.

For a full line of Artificial Fish Habitat and Attractants, check out TexasAnglerProducts.com.