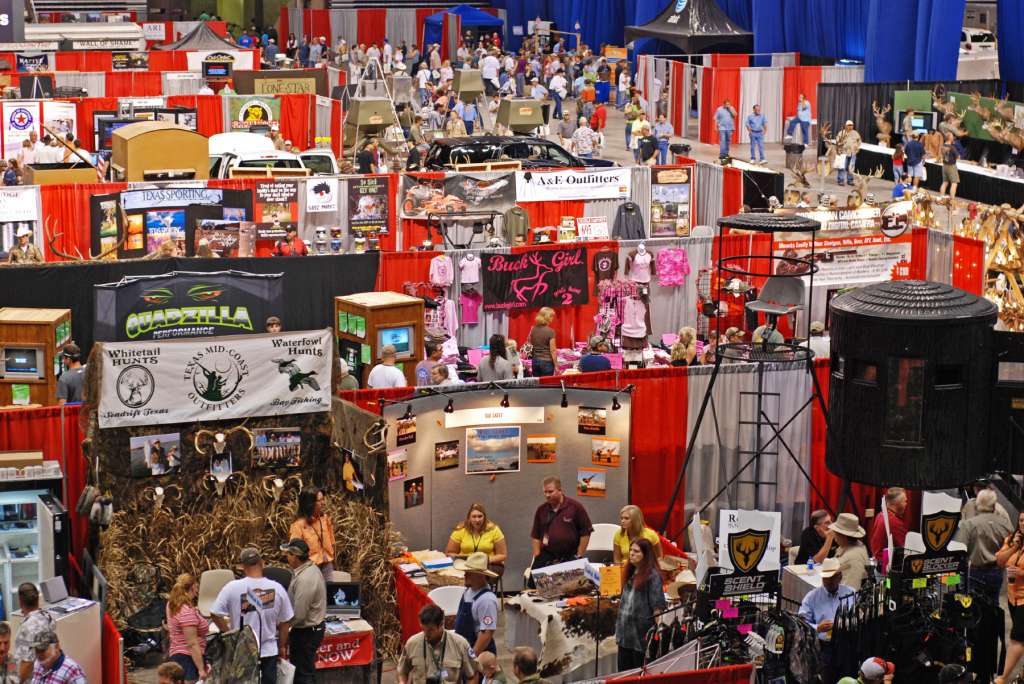 When he founded what may be the first magazine focusing on white-tailed deer hunting in 1975, he didn’t sell subscriptions; he sold memberships in what he called the Texas Trophy Hunters Association, headquartered in San Antonio.

Magazine was nowhere to be found in the publication’s name, Texas Hunters Hotline, which later morphed into The Journal of the Texas Trophy Hunter.

In 1976, he decided to get readers and hunting product manufacturers together for a convention in the banquet room of El Tropicano Hotel.

There weren’t many products back then, though.

“About the only people around that manufactured anything deer related were Lehman Deer Feeders, Texas Hunter Products, and C.E. Blackwell, who made the first portable tripod,” Johnston said. “As far as I know, the Texas Trophy Hunters was the first to put on a solid whitetail deer show, and we were more interested in Texas than anything out of state.

“You know how Texans are.”

The event grew along with Texans’ passion for deer hunting.

Celebrating its 40th anniversary, the Hunters Extravaganza — billed as “The Granddaddy of All Hunting Shows” — will kick off Friday in Fort Worth. The event moves to Houston on Aug. 12-14, San Antonio’s Freeman Coliseum Expo Hall on Aug. 19-21 and Corpus Christi from Aug. 26-28. More than 700 exhibitors will be on hand at each three-day show, with record attendance expected, TTHA trade show director Christina Pittman said.

“There’s always a reason something is successful, and the main reason the Hunters Extravaganza has remained successful is because there is a lot of ‘want to’ for this kind of thing,” Johnston said.

He compared it to an annual reunion of fishing and hunting enthusiasts.

“A lot of them don’t have pictures of grandkids in their wallets, they have photos of deer or bird dogs,” he said.

Seeing the latest products and high-tech gadgets also is a draw.

“They bring a pretty good load of stuff, and the guy who invented it will tell you how to use it right then and there,” Johnston said.

It’s also a chance to talk to guides and outfitters in person.

“We have outfitters from all over, and a lot more African outfitters are coming in,” Pittman said.

There are plenty of attractions, too. Those traveling to each show include Joe Martin’s Snakes of Texas, the TTDA Deer Contest, a 3-D Archery Contest (except for Corpus Christi), the Texas State Rifle Association’s air gun and archery ranges, a photo booth that puts people on the magazine’s cover and the latest addition, alligators from Gator Country.

The deer contest at each venue includes scoring of entrants’ antlers plus prizes and awards in four divisions, three regional subdivisions, categories for adult and youth male and female and a people’s choice award.

After its first event, the Extravaganza moved to the Villita Assembly Building for two years, outgrew it and went to the Henry B. Gonzalez Convention Center.

“By the fifth year we pretty well were on our way,” Johnston said. “Then somebody said that if this works in San Antonio, surely it’ll work in Houston.”

So they opened there and went through several venues before settling on the NRG Center.

Fort Worth came next. After outgrowing Will Rogers Center, it moved to the Fort Worth Convention Center this year.

Last year’s show at the American Bank Center was the first in Corpus Christi.

In the mid-1980s, the Extravaganza expanded to Jacksonville and Tampa, Fla., Mobile, Ala., and New Orleans.

“The out-of-state shows were wearing the vendors out. We stopped in the 1990s,” Johnston said.

“I don’t think any others around the country rival the size and scope of ours,” he said.

The third leg of TTHA’s tripod came in 1995, when TTHA expanded into television.

“TTHA was the first outdoor TV show on Fox Sports Southwest,” Johnston said. “They didn’t have the Outdoor Channel then. Now they probably have 250 outdoor shows.”

“Texas Trophy Hunters TV,” which appears on the Outdoor Channel, won four Telly Awards this year, two for editing and two for cinematography.

The ubiquitous TTHA logo — a sketch of a European mount with monster antlers and two huge drop tines — adorns apparel, barbecue sauce, coolers, firearm cases and people’s bodies in the form of tattoos.

“In terms of what you see in the back windows of pickup trucks, the A&M logo and the TTHA logo probably are running neck and neck,” Johnston said.

He always thought big, but not that big.

Where: Forth Worth, TX – New Location - Fort Worth Convention Center