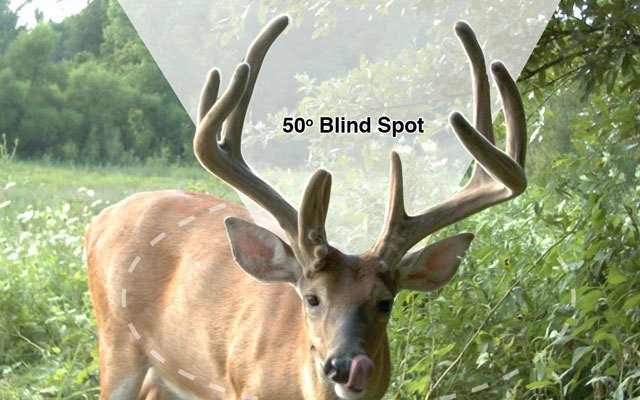 WE KNOW DEER HAVE A GREAT SENSE OF SMELL. BUT WHAT ABOUT THEIR SIGHT AND HEARING? KNOWING HOW A BUCK SEES AND HEARS YOU CAN HELP YOU STAY HIDDEN.

To this day, I still don’t know how the buck spotted me.

It was early bow season, and I was perched 25 feet off the ground in an ancient oak tree. A month before archery season, I had spent several hours “squirreling” my elevated stand, meaning that I’d strategically tied oak boughs around the stand with dark green baler twine to blend it into the gigantic tree. The limbs would give me protection from being spotted by deer as they neared the stand.

The setup was perfect — just like the camouflage clothing and face paint I had covered myself with. I felt confident there was zero chance I’d get busted before I drew back on a 4½-year-old buck that had made a habit of sauntering by my stand to feed in an old orchard.

But when the moment of truth arrived, all I was left with was the feeling that I’d unknowingly done something that tipped the buck off. He appeared out of the timber and started walking right toward me. At 75 yards away, the deer suddenly stopped, looked straight at me and then turned back the way he had come and took off.

Did the wind turn? Nope.

Did I move? No siree bob.

Even though the heartbreaking encounter happened five years ago, I still feel like it was yesterday — and I still don’t know how the buck saw me.

Ask 100 hunters how well deer can see, and you’ll probably get 100 different answers. The Internet is clogged with stories on the visual capabilities of whitetails. One story claims deer can see 100 times better than humans, while another states whitetails can easily see 300 times better.

The same goes for how well whitetails can hear. I’ve personally read one story that stated deer can hear 100 times better than humans. Another said they can detect sound only 10 times better than us. So much for the Internet being full of useful information!

The truth is, these are all just estimates of how well deer see and hear. They are primarily derived from either personal, or other hunters’, experiences. But recently some scientists have studied these two senses in deer, and what they’ve learned might surprise you. The knowledge they’ve gained will definitely help you achieve better concealment while hunting, increasing your odds of taking more wary deer.

When it comes to whitetail vision, everything about deer eyes is uniquely designed to help the animals detect and escape from predators. Start with how the eyes are positioned. A whitetail’s eyes are found on the sides of its head, enabling the deer to have a field of view (FOV) of about 310 degrees. This means a deer’s blind spot is only about 50 degrees — less than a third the size of our own. In comparison, humans with two healthy eyes have a field of view of 180 degrees.

To understand the physical components of deer vision and how they are different from ours, let’s harken back to high-school anatomy class, where most of us learned about eye anatomy. The retina contains two types of photoreceptors, called cones and rods. Rods are most sensitive to light changes, shape and movement, and they contain only one type of light-sensitive pigment. Rods allow us to see in low light, such as at dawn and dusk, while cones contain millions of photopigments, giving animals and humans color vision.

Humans have trichromatic color vision, meaning our eyes contain three types of photopigments. The photopigments enable us to see short, moderate and long wavelengths of light, corresponding to blue, green and red colors. In contrast, whitetail eyes only have two photopigment types, giving them dichromatic color vision. Scientists believe that deer can primarily see short-wavelength blue light, and moderate-wavelength light that they probably perceive as something between red and green.

“We believe that deer see green as shades of grays to yellow; reds as yellow tones; and blues are much more intense for deer than they are for us,” said George Gallagher, professor of animal science at Berry College.

Unlike humans, deer don’t have an ultraviolet (UV) filter in their lens, making their eyes far more susceptible to the sun’s damaging UV rays. The trade-off is that researchers surmise deer can see UV light — something humans can’t detect.

By studying the physical characteristics of deer eyes, scientists estimate deer have 20/100 vision. This means that the level of detail whitetails see at 20 feet is what normal human vision can see back to 100 feet.

“If you’re a deer, you don’t have to be able to count the whiskers on a mountain lion to know that it’s a threat,” added Gallagher.

Researchers also discovered that deer have a higher ratio of rods to cones and a pupil 10 times larger than humans. These factors, and the lack of a UV filter, give deer far superior vision in low light.

Unlike in human eyes, the cones in a deer’s eye are distributed across the back of the eye on a horizontal plane. The lens in a deer’s eye also can’t adjust to objects at varying distances. These factors give deer less visual clarity than humans have. An object a deer is looking at straight on is equally in focus as something out to the side — so don’t assume that because a deer isn’t looking directly at you that it can’t see you.

Bradly Cohen, Ph.D., a research scientist at the University of Georgia’s Warnell School of Forestry and Natural Resources, trained seven whitetail does to associate light wavelengths with a food reward to test how well deer can see. Deer were given a choice of two empty food troughs, but would only receive a food reward when they chose to try feeding from the trough where an LED light stimulus was illuminated. After being trained, deer were tested on six different light wavelengths and a variety of light intensities to determine which colors of light they can see.

Cohen found that deer saw colors in the blue spectrum best, and those in the red spectrum the worst. He also confirmed anatomical studies that have found deer can see greens, yellows and UV light, but that they don’t perceive the different color shades to the extent that humans do. Cohen noted that a deer’s visual capabilities perfectly fit their lifestyle.

“It’s no coincidence that during dawn and dusk, when the greatest amount of light is in the blue spectrum, is also when deer are most active,” said Cohen. “They’re most adapted to the wavelength of light that is most available when they move around the most.”

Because deer can’t distinguish color shades as well as we can, wearing camouflage clothing containing similar colors actually makes you appear like one big blob to deer.

“While deer color vision is important, they key in more on movement,” added Cohen. “If you are a solid silhouette, movement is easier to pick up on than if you wear clothing containing colors that break up your outline.”

Several years ago, wildlife biologists Dr. Karl Miller and Dr. Gino D’Angelo from the University of Georgia conducted clinical trials on how well deer can hear and what frequencies they can detect best.

Before digging into the research, let’s again think back to high school and remember what we learned about sound in science class. Sound is a form of energy, just like electricity or light, and is made when air molecules vibrate and move in a pattern of waves. The pitch, or frequency, of sound is measured in hertz and describes how fast the air molecules are vibrated by the sound. The faster the vibration, the higher the frequency. Lower-frequency sounds, such as human speech, travel farther than higher-frequency sounds, like an arrow hitting metal.

Miller and D’Angelo placed deer of various ages in a soundproof booth, attached electrodes and measured brainwave activity in response to different sound frequencies. They found that, when it comes to hearing, deer and humans are more alike than people might realize.

“A deer’s hearing capabilities aren’t that different from ours,” Miller said. “Their greatest capability is in the same range as sounds we hear.”

Like humans, deer hear best in moderate frequencies, 4,000-8,000 hertz. Deer vocalizations like bawls, bleats and grunts are all in this range. Deer can detect sound at lower volumes than we can, but the difference isn’t great.

Where deer excel is in detecting high-pitched sounds. While the upper end of human hearing is about 20,000 hertz, deer can hear frequencies to at least 30,000 hertz.

Just looking a deer’s ears demonstrates how they’re built to detect predator sounds. Their ears are uniquely shaped to gather a great deal of sound and to pinpoint where each sound is coming from. Without turning its head, a deer can rotate its ears to localize sound.

Whitetails are wired to quickly distinguish between sounds that represent a threat and those that don’t. This explains why deer run away after hearing two hunters whisper, but stay put when they hear two squirrels playing.

Deer also quickly learn to associate sounds like the slamming of a car door and laughter to the presence of human predators. Any unusual sound can trip a deer’s internal alarm. Hunters plod through the woods to get to their stands, but no four-legged critter sounds like a person walking. Mix up your walking cadence and occasionally blow into a squirrel call to throw deer off. Take your time getting to your stand. If you see or hear what you think is a deer nearby, stop and remain motionless for several minutes. Trim bushes and branches along the path to your stand so you don’t make a ruckus getting to your favorite hunting spot.

The moral of all this information is that hunters should respect a deer’s eyes and ears, but not go overboard. Slow down, minimize the amount of movement and sound you make, and do your best to blend into your surroundings. Taking these precautions could mean the difference between attaching your tag to a monster buck and just seeing the white of its tail.

For the ultimate in concealment, see the full line of Hunting Blinds by Texas Hunter Products with the exclusive Hide-A-Way Window System. This exclusive window system includes both clear and solid ‘concealment’ panels that can be positioned in any configuration in the blind to maximize your visibility while remaining fully hidden from the field of view. For more information and videos visit http://www.texashunterproducts.com/hunting-blinds, call 800.969.3337 or email Info@TexasHunter.com for a full color catalog by mail.