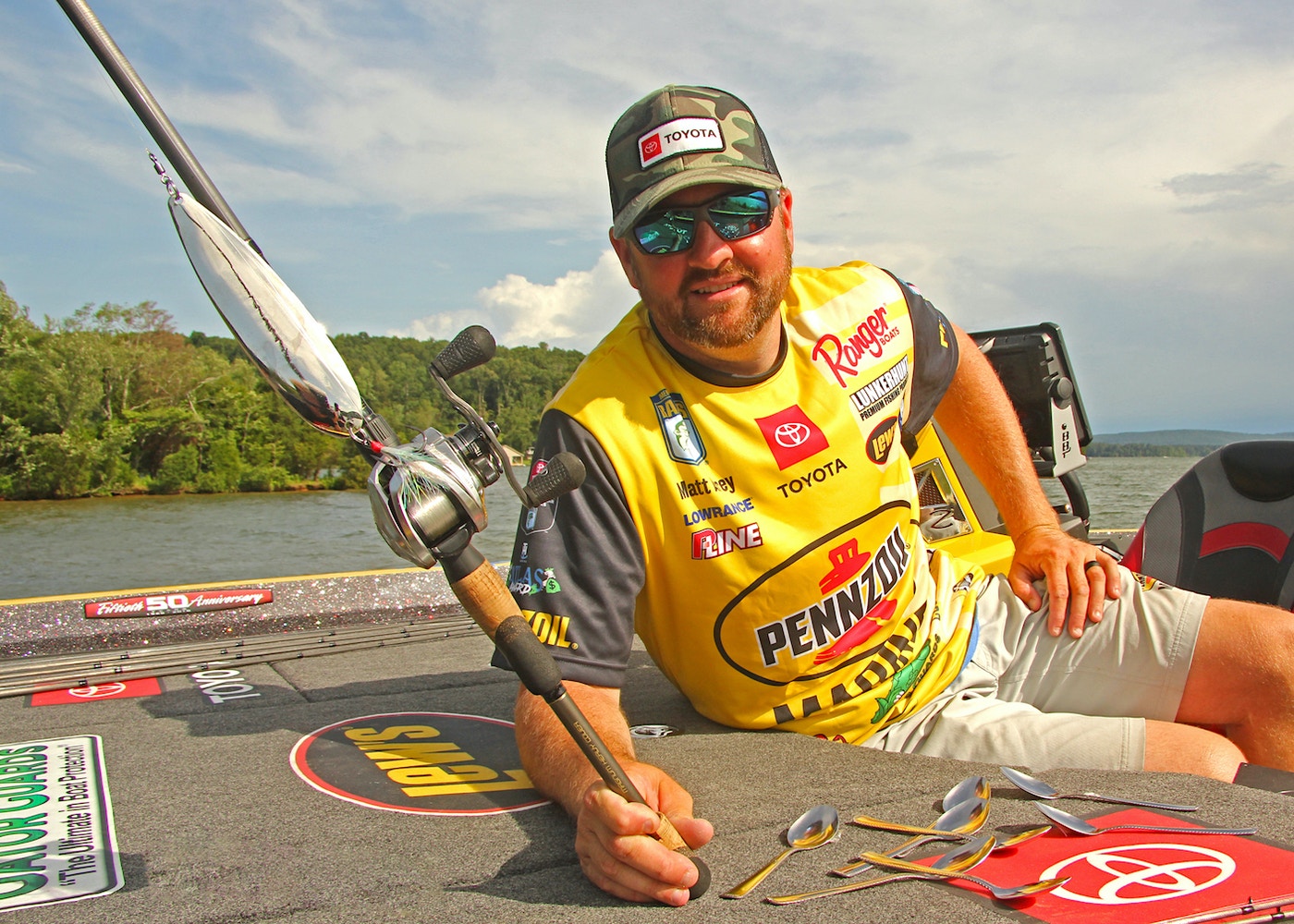 Pro angler Matt Arey of North Carolina has some specific things he does with his tackle setup that answers many questions about how to fish a flutter spoon. (Photo and article credit: Alan McGuckin - GrandView Outdoors)


Team Toyota’s Matt Arey had just slapped 21 pounds of Guntersville bass on the scales to take the tournament lead, yet he seemed equally as thrilled when a buddy handed him a giant lemonade from a vendor near the weigh-in stage.

It was hot. Like, beat you down while you’re covered in sweat kinda hot. And while Arey had done most of his damage with a prototype ¾- football jig, one of summer’s best-kept secrets sat ready to play nearby — an oversized, 6-inch 2.5-ounce flutter spoon or what some call a structure spoon.

The flutter spoon is not nearly as popular as mid-summer’s first string players such as football jigs, deep cranks, and giant plastic worms. But Arey and other anglers know anytime you’re on a southern body of water full of big bass and plenty of shad, few lures fire up a fat school of largemouth like these flashy oversized spoons.

“The perfect time for a flutter spoon is anytime bass are ganged-up offshore and feeding somewhat deep on shad,” says the North Carolina pro, who has earned nearly $1 million in prize money.

Where to Throw It

The flutter spoon may be easiest to utilize in open water situations away from the bank. That makes sense, since these big baits have a large treble hook and most anglers believe they're best used in deeper water.

But big spoons have proven quite effective in recent years along the shade lines of deeper floating boat docks. They also can be fantastic to coax lethargic summer bass suspended deep in underwater treetops. But don’t throw one into a brushpile because your chances of snagging it, and not getting it back, run higher than the mercury in a mid-summer thermometer.

Unlike a deep summertime crankbait — where Olympic distance casts are critical for the lure to reach and stay in the strike zone — a big, heavy spoon can find its way into a limited strike zone with quick precision. So a short underhanded cast or pitch is far better to probe a specific zone like a dock’s shade line, or the sweet spot on a road bed, or a point.

With these power baits you'll need some power tackle to get the job done. It's no time for whippy medium-action rods or spinning gear.

“You’re dealing with a big lure, so a big rod with plenty of backbone is critical," Arey says. "I use a heavy action 7’ 6” rod like I’d use for pitching heavy cover. And it’s really important to use a fast reel with an 8.1:1 gear ratio."

Arey spools the reel with 17-pound fluorocarbon for 6-inch spoons, and 20-pound fluro for even bigger spoons.

Big spoons feature a meaty treble hook. Arey says adding an additional stinger hook to the top of the spoon near the spit ring can increase your catch rates and help you catch two fish at once.

While some anglers tether a hook directly to the split ring, Arey adds a feathered treble through a rigging he credits the late Kyle Mabrey, a former FLW Tour pro, with teaching him. Arey uses a barrel swivel with a 12-inch leader tied between it and the feathered treble. This allows the extra hook to slide up and down the main line so when two bass are hooked at the same time they stayed buttoned up.

Oversized spoons are still far less popular than deep diving crankbaits, big worms, and football jigs in the heat of summer. But their ability to fire up a lethargic school of fat largemouth is as undeniably good as an icy cold, fresh squeezed lemonade after a sweltering hot day on the water.

Alan McGuckin is Director of PR for Dynamic Sponsorships, a Tulsa-based company with clients including Toyota, Carhartt, Quantum Fishing and others.