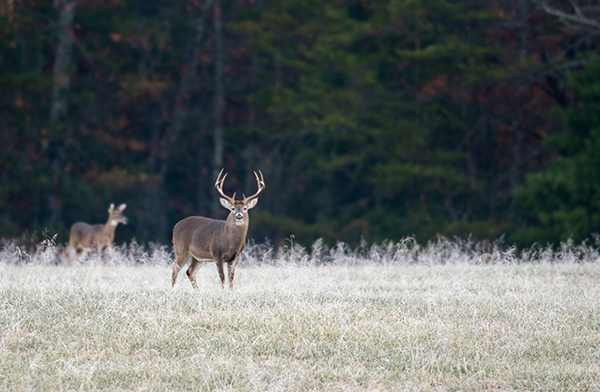 By Joe Doggett, Texas Hunter Products Contributing Writer.  A BIG WHITETAIL BUCK APPEARED from nowhere and stepped through the brush. His dark and heavy antlers glowed like a crown against the South Texas dawn. Swelling with the power of the rut, he paused to savage a mesquite bush.

At once, the great buck filled my focus. I turned on the tree stand, using the deer's preoccupation with the rub to mask the motion. But before I could ease the rifle into position, a sharp and alarming snort exploded in the brush behind the tripod. I winced and the buck bounded.

The chance was lost. A nearby doe, forgotten in the urgency, had seen my movement and reacted with an emphatic blow? That incident illustrates the importance of doewatch. Sightings of female deer almost always outnum­ber antlered encounters, usually by a wide margin.

For whatever reason, you can expect to see the bold ears of many "two-pointers' for each chance at a mature buck. The aspiring buckslayer may elect to pass on the parade of antlerless deer, but this is no license for an indifferent or cavalier atti­tude toward does. The savvy deer hunter respects these walk-ons. He knows that the close appearance of a doe can hurt—or help—his chances for a buck. The whitetail doe is equipped with sharp survival senses. The common denominator of her nose, ears, and eyes is "big”, and these overbored defens­es are backed by exceptional alertness. Look at the typical mature doe. I mean, really study the face and demeanor of this animal. She has a pained and worried countenance. She knows all about noises in the night.

The whitetail doe is wired, seldom moving or feeding for more than a few moments without an abrupt jerk to study the shadowed brush and treacherous wind. She, more than the typical buck, seems committed to marking the first hint of danger. Perhaps this is an instinctive reaction that comes from caring for vulnerable fawns.

The ability of a doe within reasonable shooting range to accurately sense the location of danger is remarkable. Make one semi-overt mistake while huddled on stand, and you are promptly transfixed with a withering and ac­cusing stare. The keen doe does not look 10 yards to the left or to the brush below your ridge; her eyes bore a hole straight between yours. This cannot be coincidence—it happens time after time in the whitetail thickets.

Your position has been marked. The deer may not spook, but she will pause to determine the significance of the sight or sound or scent. If, in your bag of woodsmanship, you have a sure-fire way to imitate a chattering fox, squirrel or a skulking barn owl, or even Mary's little lamb, this is an excellent time to summon the skill.

HOWEVER, AN UNALERTED DOE. CAN WORK FOR you. If a dominant doe scans your hiding spot and, with a casual and reassuring flick of her tail, resumes walking or feeding, her confidence carries over to other deer in the area. This is a grand upgrade for you and your rifle. The doe, a respected troubleshoot­er among the herd, is now an unknowing ally to an un­filled buck tag. She becomes a decoy; Hey, guys, old Sadie says it’s clear, let’s ease out and have a feed. She also serves as a monitor.

By watching the doe you can anticipate the arrival of other deer. No movement of signif­icance will escape her senses, and anything incoming will be 'made" well before your clumsy efforts can pick up the action. If your sentry stops feeding or wandering and with cocked ears, rivets a stare into the brush, be prepared to cover that angle. The doe's attention will almost cer­tainlycommand a similar response from any nearby deer. Use this diversion to ease your rifle into position. Stay cool. A doe's calm but interested stare is the normal telegraph of an approaching deer. The new deer may not be a buck; indeed, it may not even show, but you can bet your best pair of binoculars that game was near.

When the rut is on, any doe spotted hanging inside heavy cover demands intense scrutiny. A big buck may be with her and, in typical fashion, the pair may be holding to cover. It is the nature of the mature whitetail buck to go underground and hug the thick brush when he is breeding a doe. Look and look hard, probing the tangles and shadows, before dismissing the doe sighting as a solo. Keep watching and waiting. The eventual glimpse of a massive, curving beam and a soaring set of tines may be your reward.

Most old bucks, unlike many old politicians, are difficult to bribe. A rut obsessed warlord may not bite on the food, but he might trail a doe into—or at lease near-the open area. If several does approach in a group, only one may be in estrus, but that is all an opportunistic hunter needs.

On a late-December hunt, with the heat of the rut fanning the South Texas brush, I sat on a tripod overlooking a long trail, or Sendero, cut through the shag of mesquite, huisache and black brush. A doe stepped out—close, too close. I huddled motionless, handcuffed by her nearness. Unalerted, she passed me at 20 yards and was followed, in file, by five more does. The sisterhood moved 100 yards down the sendero to nibble corn amid the afternoon shadows. Then, they turned as one, to study the brush. I eased my rifle into position.

There, on the edge of vision, was a flicker. A high, curving antler bobbled above the gray and green tangles. A mature buck was pushing close, trailing one of the does. Screened by thornbush, he stopped at the edge of the trail. A doe skittered-away and he cut into the open. He paused as she stopped, and the crosshairs settled onto the bunched shoulder.

That's a bold point - no, eleven bold points that grossed 168 Boone and Crockett points in favor of doewatch.

A well-designed deer blind, such as the Texas Hunter's Trophy Blinds, provides concealment through the use of their unique and exclusive “Hide-A-Way” window system. This window system offers 360-degree viewing that maximizes visibility while you remain hidden from the field of view. For more details including a catalog by mail visit TexasHunter.com or call 800-969-3337. #deerblinds #texashunterproducts