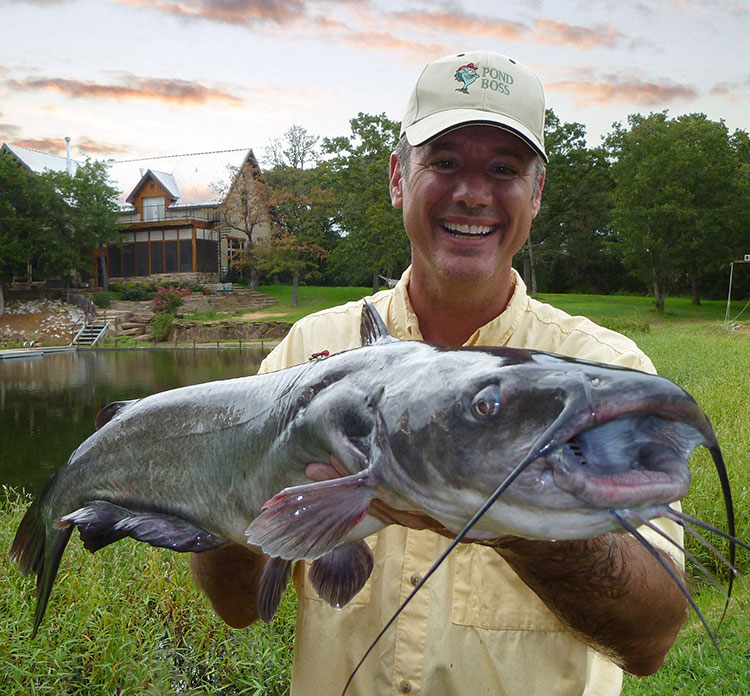 Not long ago, we heard from a neighbor that we could feed our fish. Heck, walk out on the dock, stomp your foot three times and toss out little hunks of day-old bread and watch the catfish come to the surface like whiskered vacuum cleaners and suck it down their throats. It was fun to watch, fish gently swishing side to side, mouths gaping at the surface as they honored our offerings. Then, with a fast swirl of a tail and big splash, those lanky giants headed toward the depths.

Things changed. Soon, we heard the neighbors had actually bought some catfish food and the fish seemed to perform better…grow faster and taste meatier. By the mid-90’s several feed companies were beginning to see the need to provide fish feed to a growing market of people feeding fish in recreational fishing ponds. Purina Mills took the lead when they developed Game Fish Chow, a recreational fish feed for ponds and lakes designed to feed different species of different sizes of fish. By that time, several other feed companies were pitching their products, ranging in price based on the ingredients of the fish feed. We actually could choose to feed our fish the nugget equivalent of Krispy-Kreme donuts or pay a little more for a good t-bone for our wet, slippery friends. Then, we started receiving choices of pellet size. That was unusual. Texas Hunter Products engineered automatic fish feeders designed to project the fish feed pellets into the water, up to 45 feet from the dock or shoreline. The fish feeders dispense precise amounts of fish feed at prescribed times on a daily basis.

Guess where we are, now? People are designing feeding programs for their fish. You can, too. I’ll always remember Tom Welfelt, a man in his 80’s, looking to grow some giant bluegill. He asked me to buy some. He was 80 and didn’t want to wait for little fish to grow up. He wanted big ones, now. The best I could find in any quantities that year were about four inches long. Not hardly big, at all. We decided to buy them, put them in his pond and grow them. His challenge to me was, “Grow them fast…I want to catch big bluegill.”

The pond covered just more than four acres. I had him buy four directional fish feeders. We set them around the pond, about fifty feet apart and set them to go off twice a day. Here’s where it became a “program.” The first feeder went off at 8 a.m. The second spewed at 8:20, the third at 8:40 and the fourth one at 9 a.m. Here’s the plan. I figured, based on watching fish eat around automatic fish feeders for many years, that the “feed hogs” would eat as much as they could compete for, and then move to the next fish feeder for more food. Then, they would go to the next feeder and the next. In fact, that’s exactly what happened. Within six weeks, the fastest growing, most aggressive batch had grown to six inches and quadrupled their weight. So, for the first growing season, we left the program the way it was and by fall that year, we had a few eight inch coppernose bluegill.

Beginning the second year, we set each fish feeder to go off at the same times. That spread the feed among the masses. This feeding program allowed the most aggressive fish to grow the fastest and get bigger than the rest of the group. Mr. Welfelt was pleased that he could fly fish with a popping bug that fall and catch some hand-sized bluegill. Sure, he caught some smaller ones, but when one of those bigger fish hit, he laughed like a seventh-grade girl at a slumber party. By the second fall, we had some bluegill pushing ¾ pound.

In today’s world, you have lots to choose from. Special feeds for your special fish.

Remember the neighbor and the little hunks of day old bread? Gone the way of the nutritional buffalo. Feeding your fish has come a long way.

Fisheries biologist Bob Lusk is in his fourth decade helping people design, build, stock and manage private fishing ponds and lakes as a consultant. Bob is also editor of the nation’s leading pond management publication, Pond Boss magazine. You can subscribe to Pond Boss at www.pondboss.com and reach Bob through that website, or his business website at www.bobluskoutdoors.com. Bob’s staff is available to assist pond owners, too. Office number is (903) 564-5372.